Originally New York was not part of my plan, but as a jump off point for my Latin American travel, it was the cheapest option. And for long term travelers with a certain budget, it usually is the greatest deciding factor. But after 3 weeks here in the US, I decided I couldn’t have made a better choice. Here are my reasons why–

Because I have been a tourist here before, there is no longer the pressure of doing the touristy stuff. Although I did visit museums, parks, squares, and see Lady Liberty. It is the perfect place for me to chill out and enjoy the city.

Long term travel is not exactly a holiday. It may be a “fun” problem to decide where to go next, but it is a problem that can cost you some nights sleep. There are many decisions to be made as this has become your daily life. It can actually be more challenging than the usual daily life with set routines and basically operate on autopilot.

I was a bit bored when I first arrived NY, but since I met up with Fiona and got pulled into her network of friends, it had been a blast. I ate at a bajillion of restaurants, ice skated at Bryant Park, had stamp of my face made, had non-tourist access to the UN, modeled for an ICP student, etc.

It continues to hold true for me that the most memorable part of your trip will always be associated with the people you meet. I have been truly blessed with amazing encounters throughout my trip. NYC was not an exception. Thanks to these girls. 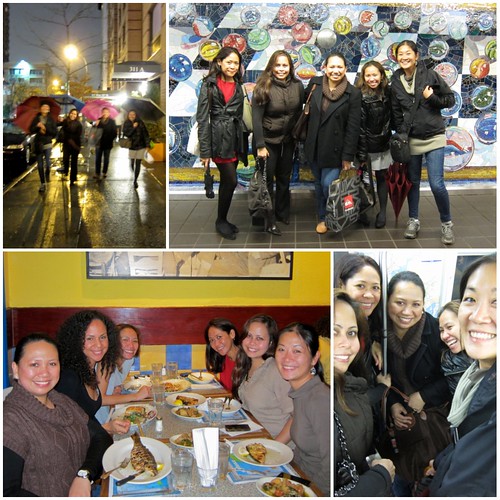 Joy and Brian are my good friends who moved to the US years ago, and whom I’ve not seen for 6 years. I didn’t know Virginia is a stone throw away from Washington DC (I cannot know everything!) and that they’re both working there. So I missed them in 2009 and when they went home earlier this year, I already left for my trip. So in coming here, I got to visit them and spent thanks giving weekend with them. It was real good times catching up.

Despite the cold temperature, I felt so at home in the US that it was like living daily life rather than traveling. It was an important break for me after continuously traveling for over 5 months, being in so many cities, seeing so many monuments, and meeting so many people. I needed the still moment to let it all settle in.

So this morning, rolling my bag to Penn Station en route to JFK, I felt the familiar butterflies in my stomach that usually accompanies me when I take off for a trip. It was absent for a while in the later part of this long journey. Going to a new city had become very natural. I had a feeling that I’m just leaving for my big trip. It’s a Great feeling. So this must be some kind of second wind in travel?