There are reasons why I’m writing about beaches in the UK: (1) Because they have beaches being an island; (2) It’s officially summer! according to every single person I know; and (3) because I love beaches and I will visit it even if the weather is below 20 Celsius.

surprising what you find in European beaches huh?

When the sun peeks out for 5 minutes in London, people hop on the train and head for the beach in Brighton. It takes 1.5 hours and costs around GBP10-15 return, depending on the day, time, or which train you get.  So one day when the thermometer hits 30, well, when in Britain…

Brighton Beach is not what you expect of a beach. From afar, it looks pretty normal sandy color beach, but when you get closer, they’re actually pebbles! I was very fascinated by it that for a minute, I was just obsessing about the fact. The water is icy cold even if the sun was blazing hot. But still you can see brave bodies dipping in their swimming costumes. I’m not one of them.

Brighton is a vibrant place with a happy vibe. The beach is clean and as you can see, people don’t mind the pebbles. My friend and I laid on the beach for a while enjoying the sun and people watching. The boardwalk has a lot going on: street performers, vendors, and plenty of open air cafes where you sit to get a pint or two.

Brighton is not a new town; it has history that goes way back and has remarkable landmarks such as the Royal Pavillon, the Brighton Pier, clock tower, and a couple of museums. It is great for a day trip but definitely worthy of a couple of days stay. Brighton Behind the Beach

You’ve been to the Castle Rock, walked the Royal Mile, into the Palace of Holyrood Palace, joined the Literary Pub Tour (not the ordinary pub crawl), library, cemetery, hills, ponds, churches, cafes, pubs, etcetera. My point is I’ve seen and been to all the glory of Edinburgh (read: EDIN-brah) and I still have one whole day here. So when someone mentioned there’s a beach 20 minutes away. I’m on the next bus (catch #15 or #26)!

Getting to Portobello beach is like walking into a faded old photograph. The dependable Scottish overcast certainly helped paint the picture. The beach extends for miles and it’s also wide that it seemed deserted when I arrived. The wide space all over muffled the sound of the waves and but lets in occasional voices of children playing. I stood facing the sea, in my windbreaker, having a thoughtful moment. I was 2 months into my round the world trip, and I was still in happy disbelief.

Portobello Beach has certainly seen its hey days. Walking the promenade today, you’ll see families with children, old people with dogs, cyclists, joggers, some teenagers. You also see Tower Amusement and Fun City arcade which could be part of a lively boardwalk amusement park in the 60’s; and there’s me sitting at the outside table of one of the 2 food stalls, trying to eternalized this moment in words before it starts to rain.

If this were a movie, this is when some random guy comes over to ask me to look after his bike while he goes get tea. He would start a conversation by asking if I’m writing a best selling novel. He would be someone with an exciting job; a treasure hunter, a secret agent or such. He would be interesting and engaging; he would ask me to dinner at a fancy restaurant called Tigerlily. After he’s take me to this cool tiny pub with live music for a drink. He would hand me an antique Russian pill box he found while scavenging for treasure. He would ask me to ditch my Isle of Skye tour tomorrow and travel with him instead. If this were a movie, he would look like Matthew McConaughey! old buildings probably the police station or a church Do you know of any other Brain beaches I should check out on my next UK travel? I’ve heard of Weymouth which has tons of things to do. 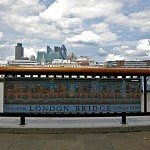 No subtitles in London 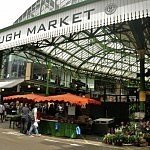