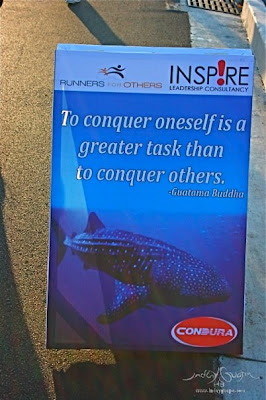 Yesterday I was initiated into the world of running by participating in my first marathon ever: the Condura Run for the Whale Sharks. I’ve been thinking (and talking) about running as a sport, basically to keep in shape, eversince sole sister banggingay shared her passion for it and my cousin Susan started running and joining races. Thanks to bangging for tagging us along her come back race since her accident last December, as we good naturedly call – peer pressure.

I can walk far and long but not really run, unless we consider running around CKSC playground during the hexagon’s elementary days. I tried training in Kuta beach before sunrise 2 weeks ago but was disheartened after dying to grasp for breath 5 minutes into the jog. I wondered how I’m going to do the marathon. And what’s worse is I got my back injury because of it, I think(!). Thankfully it healed few days before the run after countless massages, including one from a Balinese healer in Sanur.

Lu-ann and I have been talking about joining the Nike clinic before the marathon but I was traveling at that time. Susan has been inviting me to run with her but due to my nature, nothing ever happened (yet, he he). So it seems irresponsible to plunge into a race with zero training. But we reasoned, we never train to go shopping. The analogy being Megamall A to B is 1 KM long and 6 levels makes it 6KM, and we’ve been crossing this mall back and forth since it inaugurated in 1991! :D

I set my alarm for 4:30am but awoke at 4:00am, as what usually happens if I’m excited for something (diving, surfing, traveling). I went to Girlie’s room expecting her to be asleep but found her up and ready to go. Great. Lance called me at 5:00am telling me that they’re already at the Fort. Susan, who ran 5k thrice before and won every time either 2nd or 3rd place, is running her first 21k. She wanted to run the 10K but it was all filled up, as was the 5k. We were at my mum’s birthday party the night before, and she advised us to drink green tea before the race, so we did. I didn’t smoke nor drink coffee before for fear of dehydration, even if I was continuously psyching myself that this is but a shopping trip. ;) 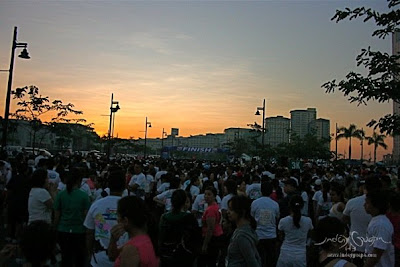 We got there at 5:30am and saw the 21K runners crossing the street. The sky was pink and energy level was high, but not tense. It was a successful event based on the attendance. They said the participants more than tripled from last year, when Condura run was born. Also the difficulty in finding a parking space was proof enough. I love the atmosphere. It was relaxed and fun. Friends doing beso-beso, cameras clicking everywhere, Banggingay and Inday Guapa will be running with DSLR strapped on their necks, lol. I had with me my Vivitar UWS. And you see kids and dogs who were registered participants too. Contemplating on registering Garfield, Holga, and Hotdog for next year. :)

The categories were 21k, 10k, 5k, 3k. We were registered for 3K (aka saling pusa, hehe) so we were the last to take off. Nonetheless people cheered and roared when the gun fired for us to start!

It was not easy but it was not too hard. We were relaxed and just kept an almost walking pace. Soon 5 of us were separated and fell into buddy system. (1)Lu-ann and I (2)Inday Guapa and her Camera, hehe, and finally (3)Girlie and Bangging, who admirably pep-talked and guided Girlie into finishing the run. 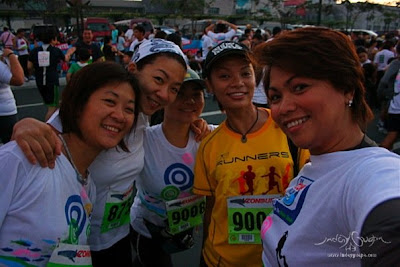 I don’t know how long it took us exactly. There were 3 official clocks so I suppose there were not enough respect for the 3k runners, lol. I wore my watch with timer, but guess what, I forgot to set it. he he. Lu-ann and I finished the same time and we estimated, perhaps around 20 minutes (officially clocked @25:18). 3K seems like a short distance, but I was beginning to tire after a while. I thought we were running a rectangle so after 4 turns I expected we were finishing, but we’re not. So later I found that we ran a ninoy glasses shape route, so there were 6 right turns. When finally I saw the blue banner, I quickened my pace and dashed (ok, hardly) to the finish line. Yay! 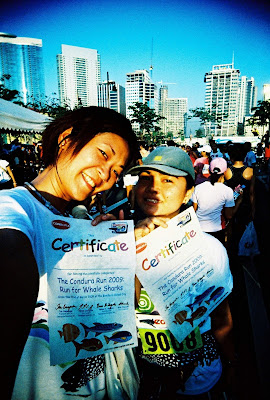 Lu-ann and I congratulated each other as we were handed colorful certificates for completing the run. We took a few photos and hydrated ourselves with the giveaway water and power drinks. Then we wandered around and waited for the other solemates. Then we met up with cousins Lance and Zz and waited to cheer for Susan to cross the finish line. 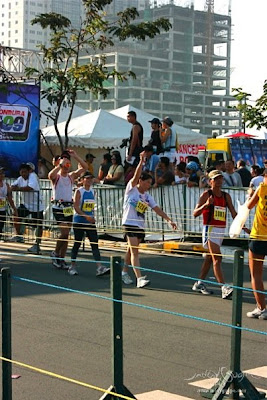 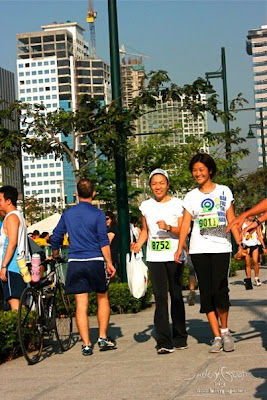 I enjoyed the event even if I slept the rest of the day and was a bit sore all over. I think running can be my sport, but not competitively, I’m happy to finish. I’m actually looking forward to next week’s Pinay In Action where we’re registered for 5k. And will look into regular training, really.