In 2007, I accompanied my father to Hong Kong where he had a business to attend to. The business wouldn’t take more than a day, but we decided to stay a couple more to visit his brother. My father was from Hong Kong before moving to the Philippines to marry and raise a family.

One morning after our “dimsum,”  we started walking. Aimlessly somehow we came to his old neighborhood. He pointed at #29 Java Street. It used to be his address, he told me. Now there stood the Java Mansion. A Bank of China office is where his Chinese drugstore used to be. He knows every corner by heart even if most of the buildings are new. Though some remained as when he left, like an old egg-roll factory. I was transported back in time as he lead the way, oblivious to the new landmarks, he recalled what once stood in their places. I had the image of the city in black and white.

I may have known my father all my life, but I’ve never met him as a young man. The promenade we took that morning, he was 20 again. It was an interesting experience for me and I was happy to (literally) walk down nostalgia lane with him. He had glints in his eyes when he recounted this to my uncle later that day. And they began to reminisce and tell the same stories over and over again. 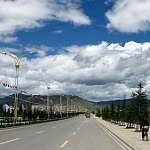 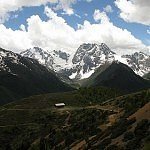