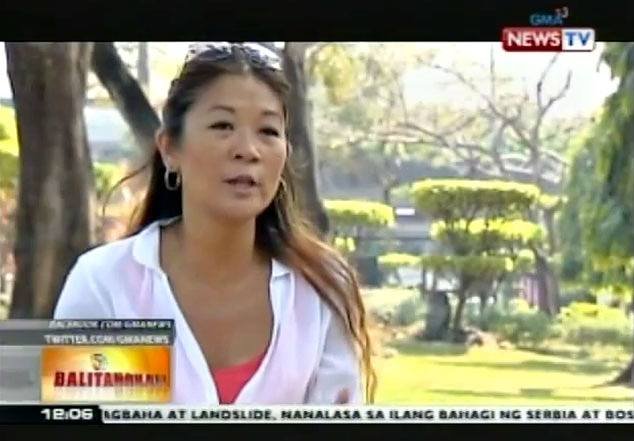 I found the video of my interview with GMA Network and have now uploaded to the Wanderlass Youtube channel. The interview that I’ve cleverly entitled “Wanderlass TV Interview” was first seen on 24 Oras, a weeknight news on GMA Network, on May 14, 2014.

I missed its broadcast because I don’t really watch television. But my friend Jun saw it, took a photo of his TV and shared it on facebook.  A few days later, another friend Toto said he saw the segment on GMA News TV. It was around noon time of May 19, 2014. And because I still don’t watch TV, I didn’t see that too. Last week though, Jori from GMA Network sent me the video. So here you go, if you care to see the Wanderlass Tv interview.

So the interview is in Filipino, for the benefit of the curious international people, it’s about couchsurfing. Couchsurfing is this website that connects travelers with hosts. It fosters cultural exchange by, for example, bringing a French traveler to a Filipino home. The traveler gets an inside scoop on what a country is about beyond the tourist spots. He gets to experience the daily life of the people in this country. As for the host, you bring travel to your home by bringing in a traveler.

While it is true that many people used this as a means to travel cheaper, by saving accommodation costs especially in expensive cities like Paris or New York, one should never make this the only reason to do couchsurfing. It is always interesting to see what adventure you get with a local.

It’s an amazing concept but should be used with caution. The new feature mentioned about the horrific experience of a Chinese woman getting raped in Leeds.  I have been a member of couchsurfing since 2007. I’ve hosted over 50 people in my house and have been hosted many times as well with no incident. I don’t credit this to pure luck. As with everything else in life, we have to be discerning with the choices we make, including choosing hosts and guests in couchsurfing.

I was very surprised that the couchsurfing feature was centered on my personal travels, particularly on my around the world trip. I like it that they referred to me as the Pinay Adventurista and then showed my skydiving and bungy jumping video. When Jori contacted me for this “summer feature” on traveling, I thought I was going to be one of the many interviewed.

I’ve been interviewed and featured a few times in newspaper and magazine pieces, but this was the first time on TV. I felt bit awkward seeing myself on video. My voice always sounded kind of weird to me. I was actually not sorry that I didn’t catch the feature on TV, haha. It would be fine for me to never see it actually. Then one month later  I received a message to a link of this wanderalss tv interview!