so the minute I claimed my luggage at JFK (yes luggage), i knew it was not as hot of an idea as when i decided to bring a huge luggage. it’s not filled to the full capacity, but i thought it’d bring a big one to fill later, than several little ones since i hand carry my dslr and laptop.

for one i couldn’t even lift it off the baggage carousel. fortunately, a chinese guy helped me out. it’s a wheeled bag so shouldn’t be a problem even if i had to make a lot of detour to use elevator and escalator, the problem is it wasn’t stable and kept falling on one side. so i couldn’t even leave it alone for a bit even while waiting for the train. so at one point, i put the camera bag on top of the luggage while waiting for a ride, they both fell. damn.

i was told that i could take the shuttle for $2.5 from JFK to the center. I was to meet Vangie at 3p.m. but was running really late because the immigration took a long time, and also took a while for me to figure out the airport, bus, subway, sky train, and LIRR. and when we finally met, we were so full of bags that we couldn’t really move! we ended up sitting outside the post office near Madison Sq. for a long time. Although it was alright for I got to shipped all the stuff I’m supposed to make my bag lighter… although not any more stable.

so as i finally start to take in the city and admiring it, while still on the post office step, my shutter bug caught on and i took out my camera. 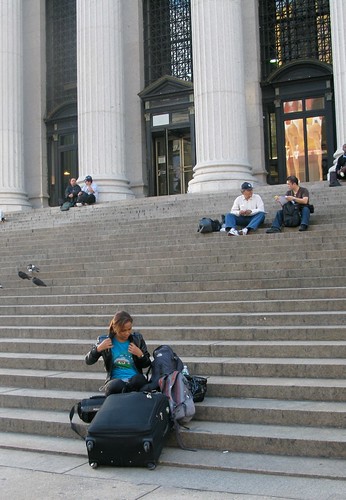 LO and BEHOLD! I found broken glass inside my bag! My polarizing filter was broken into a billion pieces! My stomach turned and I felt sick! Flashback to my camera bag fell with the luggage earlier at the sky train platform! I couldn’t see if the lens is broken or scratched or broken. gulp.

It was a good few minutes when i saw a man walking with a shiny new Nikon plastic bag. I wanted to run and asked him but Vangie was out buying water and i was the manning our billion of bags at the steps. so finally vangie arrived and she went to asked the guy.

we walked toward the direction of the camera shop. we saw more and more people with this nikon shopping bag and we asked one of them. then we saw it. B&H Camera. Halleluja! It’s a huge building of Camera stuff, much like BIC Camera in Japan. We walked directly to the DSLR help. I showed the guy my camera and told him of my sad tale. The thing is, i couldn’t get the broken filter out of the lens (Nikkor 18-200 @ $800). He couldn’t too. He then offered to have the technician do it, BUT no guarantee – do you understand? No Guarantee on the Lens, ok??

After 15 minutes, felt like 15 hours, he came out with my lens sans the broken filter! I checked the lens, good as new! BIG SIGH OF RELIEF! they didn’t even charge me for service or anything. he just directed me to where i can get my new filter. 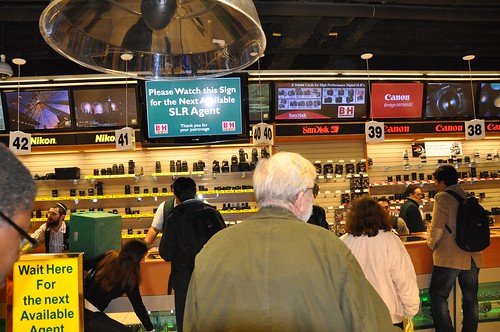 Later that night, we met up with our host Brian for dinner at Hell’s Kitchen – this part of town so called due to the massive concrete buildings around and during summer, it gets hot as hell. Now, it became a quaint little place with plenty of nice restaurants and bistrol We were at HK, one of those little nice places. I guess I was so happy that my lens didn’t break that we ended with $200 bill of martinis! 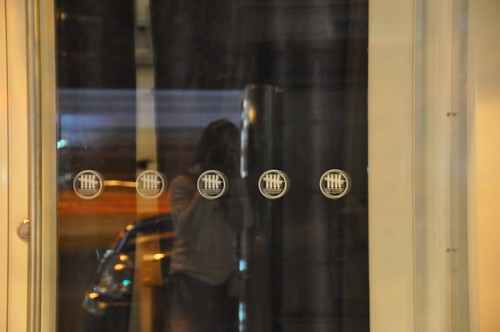 Needless to say, with over 15 hours flight, 12 hours time difference, no sleep, fatigue… martinis just doesn’t mix well. the next day i woke up with a f@#$%^ hang over. Dammit!