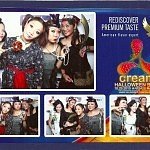 I attended Manila’s biggest Halloween event at A. Venue in Makati with my sisters and some close friends. It was organized by BigFISH Entertainment, name associated with parties and house music in the Philippines. We arrived at 11p.m. and was shocked by the traffic and crowd! We’re so glad that we opted not to drive ourselves! Because the driver told us later that he was not able to find a space to park for 2 hours–wow, exaggerated!

I would say that it’s a successful event based on the number of attendees and sponsors. Regular tickets cost 800 pesos. 500 pesos if you buy in advance (available online). VIP table is priced at 15,000 pesos good for 20pax. This is according to Vangie. I didn’t inquire from the event organizer. But had I known that a lot of friends were interested to come to the event (as i ran into them there), I would have organized for a VIP table. I’ve attended these BigFISH parties and I know how painful it is without table, specially if one is wearing a 3.5inch heels!!

We made quite an effort in dressing up. Not that we have costumes made, although we easily could. All of us wore dresses we already own. Shopping for accessories and creative makeup transformed us into our chosen characters. Thanks to SM, none of us spent over 200 pesos. ;-)

Halloween celebration wasn’t big when I was growing up. We only see them on television and movies. I was in fact quite envious of the trick-or-treating children on tv. But the last few years we see the Filipinos adopting and embracing this western holiday. Each year the stores are getting more prolific with the selection of masks, costumes, and various toys for props. Now while we’re no longer kids, who is to stop us from being part of this festivity??? ;-) Check out some of the photos taken during the Cream Halloween Ball!

However, this is not the first time I took part in the Halloween merry making. Last year I was in New York with a couple of good friends and we decided to bring costumes with us. I dressed as the “Resident Evil” and actually had the outfit made for the occasion! I love Ging’s “Kill Bill” in cool yellow sport suit. Vangie didn’t bring one so we went to a clothing store specializing in halloween effects. Thinking about it now… New York was amazing!

Since it was my first Halloween, I was so overwhelmed with the whole experience. People were really into it this part of the world! it was specially fun during the evening when we came out in our costumes and it was totally normal, I love it! We didn’t even attempt to join the official NY Village Parade because we were sure it’s going to be jam-packed. Instead we head over to the East Village and walk the street. Saw kids, teens, and adults roam around with capes, fangs, and sword pierced through their chests. I said hello to Smurf, the Mario Brothers, and Flash Gordon. It was festive enough for me without the pushing and inevitable crushing!

Here enjoy a montage of pictures from my last year’s New York Halloween that I never get to blog. :)

So how is it at your end of the globe? Did you take part in any of the hulabaloo this year? Is Halloween part of your culture as a kid?