I’m back in Paris with 1 goal: Conquer as much museums as I can. Why? Because I already bought a Paris Museum Pass before my Paris trip was cut short. I got the 4-day pass because my original schedule (before I got sick) was to be in Paris until 17th of May before flying to Netherlands. Anyway, I am only staying until Monday (3-days), but I will still get my money’s worth.

Museum Pass is a great deal, if you like museums, but then why won’t you visit museums in Paris? Some of the great benefits of having a pass are:

(1) it lets you visit as many museums (over 60 museums & monuments) as you can within the number of days you chose. Your options are 2 days, 4 days, and 6 days.

(2) You will be able to skip the long queue to get the tickets that could take 2-3 hours, especially the popular museums like the Louvre, Versailles, D’Orsay, Pompidou, etc.

(3) If you’re strategic enough and able to visit 2 or 3 museums a day, the total savings will be significant.

The pass has no expiration, but once you started, you can’t stop, because you have to use it on consecutive days. Donc, the marathon.

Is one of the world’s most extraordinary museum! It houses one of the largest collection of modern art in the world. The building structure itself is a spectacle on its own with a merry meeting of steel, glass, colorful pvc pipes and a see-thru escalator visible from the outside. It looks like a building still under construction or others would term it, a building that looks inside out.

I thought I’d come here first after seeing lot of classical artwork at the châteaux and Rijk Museum. I’m a fan of modern art although I don’t claim to understand them. I like how they shock and make one ponder and often fun to look at. My favorites are cubism and surrealism. Although there those art that are really beyond my unknowing mind, like the big canvas that was painted black and nothing else or those splatter of random paint. They’re too deep for me and they don’t even look too pleasing to my eyes. Sometimes I consider them an excuse for art. But again, I’m not trained.

One can start the appreciation from outside by admiring the remarkable building. It has an interesting fountain that I cannot say I like or not. There are cafés all around where you can sit and admire the building from all sides. Of course, the countless souvenir shops. There’s a big quadrangle of open space where street performers and painters/artists scattered around.

Inside, the museum is overwhelmingly grand and modern. It has 6 levels but only the 4th & 5th floor house the permanent collection. Other floors are occupied by theatres, temporary exhibits, library, souvenir shop, bookstore, cafe, restaurant, and others. You have to take the snake-like, see-though escalator with view of Paris (Eiffel Tower too) below.

The nicest thing about here is that they allow you to take as much pictures as you like, as long as you don’t use flash. I took everything that enchanted me which I will upload here. It has a relaxing and freedom feel in there. It even has benches where you can just sit and stare into space, but I didn’t stay too long, remembering my mission this weekend. I enjoyed the Philip Stark collection, work of Picasso, Kandinsky, Kupka, Staël, etc. It has more than traditional paintings and sculpture, it also has pop arts, video, and many, many eccentric works that indeed merit your shock, interest, and pondering.

Consulting my Paris map, it’s strategic to go to Musée Picasso next. It’s around the same area as Pompidou and I think the museum will be moderate in size. Even if my objective was to see as much museums as I can, I don’t want to overload myself. 2 large museums in a day will be too much for me, I think. And because I’ve become such a good “walker” since I came to Europe, geared with my new Paris metro map, I walked. It was a good 1 hour or so, but only because I walked slowly to admire the sorroundings of Le Marais. Remember I was complaining of the lack of convenience stores around Paris? I noted during my stroll today that there are in fact lots of “magasin d’alimentation”. They just don’t look like the typical brightly lit 7-11s, they’re small groceries at the back streets where you can buy inexpensive beverages, gums, snacks, sandwiches, etc. Buying from a cafe or a kiosk near a tourist spot, a 500ml mineral water would costs about 2~3euro
s, in a vending machine would be about 1.5~2euros, while getting them in the groceries costs like 20~30cents euro.

When I was 13, I took summer classes in Spanish at the Centro Cultural de España (in Manila). There I first encountered Pablo Picasso’s work. I remember wondering why he was regarded as such an important artist when his paintings were weird and ugly. He couldn’t even draw a face properly. I seriously thought I could do a better job. But I have come to be more open minded since then…

I read that he used to say he’s the biggest collector of Picasso paintings. And so when he died, his family had to give up over 3,500 paintings, sculptures, and other art pieces in order to pay for the inheritance tax, that later became the Museé National Picasso Paris today. This museum has the biggest collection of his work including many of his earlier paintings and even pencil sketches. They were arranged chronologically so it’s quite a journey viewing them. I saw that his earlier paintings were realistic. Then we walk through the period of cubism which is my favorite. Towards the end we see that his work became more wild, many resembling monsters and a lot of black. I wonder if he was dreaming them in his sleep, or perhaps even while he was awake? He must have so much artistic energy that needs to be exorcised through his work of art. His creative works screams. One can feel the energy exude through them. They made my heart pounds and left me breathless. I think it is amazing that it was able to stir emotion in my untrained eye. I think it would be interesting to read more about this genius’ life.

I didn’t think I could look at another portrait of King Louis XIV or view another Royal Bedroom. I was seriously thinking of skipping this tour even if I was really hyped about it coming to France, and well, after watching Sofia Coppola’s Marie Antoinette.

It’s Sunday and it’s raining again, or more like a persistent drizzle. Is Paris becoming London? The weather has nothing to do with it, but I decided that I will go see Versailles since it’s culture (sun)day in Paris afterall.

The château is 5 minute walk away from the station, just follow the singular sign that points right and the crowd who seem to know where it is. I think 2 right turns and there it is. It is HUGE! So we all know that this palace was inherited and made grand and extravagant by King Louis XIV and where Marie Antoinette got married with Louis XIV and lived until they royal family they were taken down by the people, so I won’t go to that. Coming here around lunch time on a Sunday is another confirmation on how the museum pass is such a good idea. My spiral guide suggested coming here at 4am(!) to avoid the queue. Seriously!

It’s very grand and impressive even after I’ve already seen 4 royal châteaux (in Loire). It’s no wonder it’s the most popular château in France. It’s said that the restoration of this palace has been faithful to the original like the interior layout almost as before even after the revolution and numerous wars. TIP: Skip all other châteaux and dedicate 1 whole day visiting the whole palace. Warning: It could mean a lot of walking.

Coming back from Versailles and getting off the Musee d’Orsay station, armed with museum passes, what would be the most natural thing to do?

A railway station turned museum, Musee d’Orsay is the linked between the Louvre and Pompidou showcasing works of art from mid 1800 to early 1900. Many people I know preferred this over Louvre and I’ve yet to compare them but I can see why they like this so much. The old building that was originally erected as train station gives an off-beat appeal to it. The giant clock that was used in the station before are still there, and working added to it’s charm. The museum has a huge collection of art nouveau, realism, and impressive collection of impressionism including many famous works by Renoir, Monet, Van Gogh.

My guide book suggested that if pressed for time, should just skipped the lower levels and go straight to 5th & 6th floor for the famous impressionist paintings. We didn’t listen because it was so hard to ignore the great works at the lower levels, especially those imposing sculptures!

The guards were so firm on hauling everone out of the building by 6pm. Someday I have to go back and finish the upper floors. I really like this museum. Tomorrow I’m going to Louvre and be able to compare. Tonight we’re just going to hang about town. We’re staying at the centre near l’Opera so it’s nice. I need to relax! 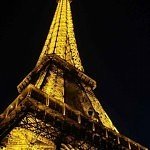 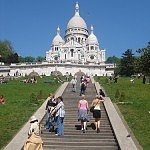